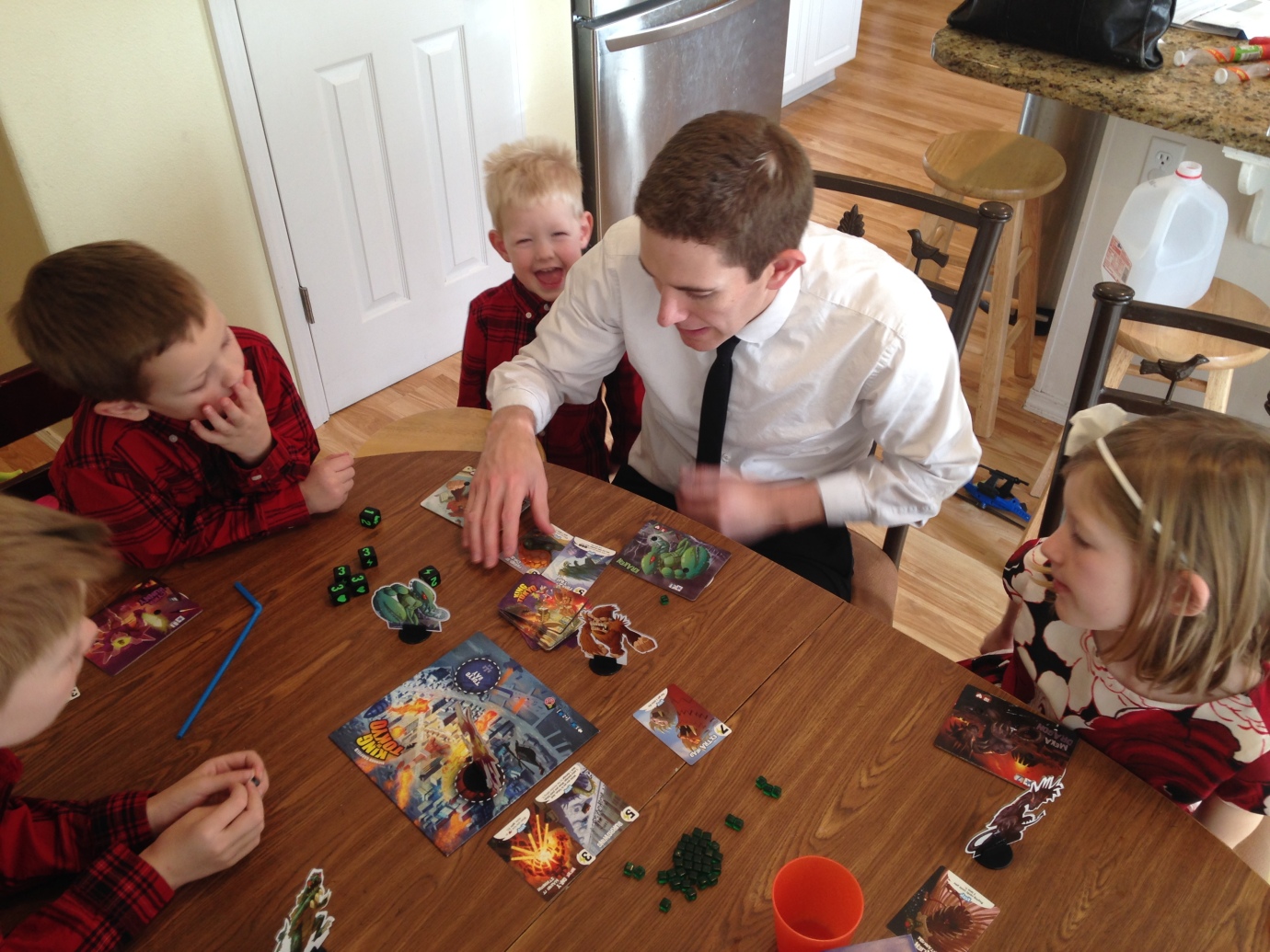 This is a top 3 game for my 8-year-old girl. She loves taking a big handful of dice and shaking them out. She also loves the giant monsters and the powers you can gain.

Here is the strategy:

Anytime throughout the game, when your points are higher than 7 or 8, you want to get into Tokyo. Early in the game, this is very useful because opponents have not acquired high attacking powers and they are often trying to get energy. You can usually get 5-7 free points before you have to make a retreat.

Depending on the other players’ upgrades, you want to exit Tokyo when your points drop below 4. Anything less than that can lead you to an early demise.

To win the game you really need to upgrade your skills. Collect energy in early turns to prepare you for the future. If you are getting the points from being in Tokyo, you can spend the rest of your dice trying to get energy.

Choosing your winning strategy depends on the available cards to purchase. You really won’t know what you will be able to do until you see what is available.

This is my favorite strategy because it ends before people know what hit them. Stay middle of the pack, attacking here and there and collecting energy and cards, but purchase the upgrades that give you extra attacks and multiple player attacks.

Once the game gets going and you have enough offensive upgrades, attack relentlessly against the players with the least life. The other advantage of the attacking strategy is that you will often get extra points by being in Tokyo, so if you need to back away from the attacking strategy, you could still win on points

Another strategy that can sometimes work is to try to stay in Tokyo as long as possible. You can squeeze just a few more points out of Tokyo and exit around 2 life points.

Collect upgrades that give you advantages in Tokyo: healing, extra attacks, defense, etc.

This strategy can pay off well but often leaves you vulnerable to the killing strategy.

You can also win just by having a bunch of extra turns. Target the cards that give you extra turns for your roles. Play as normal, but take advantage of the extra turns to take the lead.

All your strategies should employ some elements of the sneaky strike. If you get ahead in the game to0 quickly early on, the other players will collude to eliminate you. You need to be in the middle of the pack, slowly collecting points and upgrades until you are ready to make your move.

Collect a lot of energy and stay alive in the game. Purchase cards that will increase your chances of getting points later in the game. Cards that increase the value of your rolls, give you more dice to roll or change your roll scoring conditions are all great cards for the sneaky strike.

Then, when you feel you are close, buy up any victory point cards and hope for the right roles.

In all of these strategies, you need to keep the target off of your back by staying close to the pack, but preparing for the end.

What other strategies have you used?