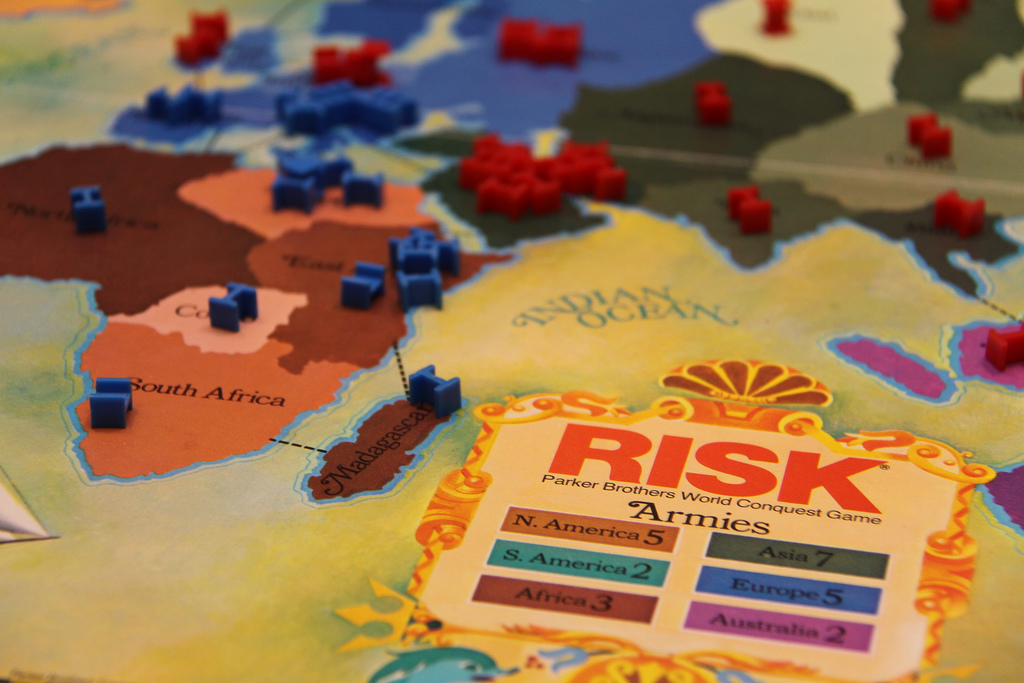 Aww, the game of Risk. The perfect game for teenagers to gather together, roll some dice, and conquer the world. Unfortunately, if you don’t play it right, you could be out sleeping on the couch.

My dad had the youth from church over to play this game one night, and the first person out did just that. My siblings and I were a little younger, so we went and got a bunch of toys, (picture My Little Ponies) and carefully laid them out on the boy, trying not to wake him up. We were successful and ended up with some great pictures.

If you don’t want to be out in the cold, follow the strategies below.

Early in the game, you need to control a continent to gather your troops. The easiest to control in order are; Australia, South America, and Africa. Those should be your early targets. Australia is good, but you can get stuck there. Africa is great, but you really need an alliance to protect your backside.

“Never get involved in a land war in Asia..”

Every single turn, you must take a country. The cards are so powerful in this game. Early on, your whole purpose is to survive and gather armies until the cards become more powerful.

This also means that you want to hold onto your cards as long as possible. Every time someone else plays cards, the value of the cards increases. Sometimes you are forced to play, but unless you can really do some damage, you want to wait and build up your armies.

Alliances are key to winning here. Unless you want to create ill will by backstabbing your buddies, (only works once) you need to set up specific conditions for your treaties. For example. You could say, “I promise I won’t attack you in South America this turn, if you promise not to attack me in Africa on your turn.”

Most people won’t back out of a treaty like this because it will kill their in game credibility. You can almost guarantee that your back will be covered. If they do back out, you can use it as leverage to get someone else to work with you to eliminate them.

This is also to your advantage because you aren’t breaking any treaties yourself.

Use your alliances to eliminate the weak. Often, you can get someone else to help you to eliminate someone. You may have to let them do the finishing moves to get the cards, but you may be able to negotiate for it.

Be careful about spreading thin early on. Sometimes it is worth the risk to eliminate someone, (this is a great time to make a one turn alliance) to get their cards, but try to cover your back as much as you can. This can be taken to the extreme. If you get trapped in Australia, you won’t be the first out, but you won’t end up winning the game in the end.

Take the Victory, and Run

Once you win, don’t play Risk again for awhile. Everyone remembers that you won, and they will make sure you pay for it the next time you play.

After everything you can control, sometimes they just get lucky, and you have to live with it.

Anyone have any other advice? I feel like this game isn’t played as much anymore, but it used to be a regular at many tables.

I introduced Monopoly to my 4 year old Isaac, and my 6 year old Josh.We picked guys, and Isaac said. “I want to be this trash can.” (apparently, we haven’t introduced them to thimbles.)

Monopoly feels like a lot of luck, but there is a lot of strategy. The secret to Monopoly is COOPERATION. That’s right. You can’t win this game by yourself, unless you are super lucky and land on monopolies. The strategy is below.

Throughout the game, you always want to buy the properties you land on. Even if you get low on money at the beginning, it will pay off in the long run.

After you’ve gone around the board twice, you should have two of a set of monopolies. If not, go around again to get two. Target the properties on the second and thirds side as you will be able to build them up to high value properties very quickly.

Once you have two of a property, someone else most likely has the third. Do what you can to get it. You may have to sacrifice a little to get it. Trade your park place to the guy with Boardwalk for the property you want if you have to. (This actually works well because it is pretty difficult to build up the Boardwalk and Park Place properties, so you could have hotels before they even have a few houses.) Often you’ll have to give someone else a monopoly to get yours established. This is part of the game, and is where a lot of the luck comes in.

When you have some money, build a few houses and hope for cash flow to come in. Don’t build so fast that you go bankrupt on one role of the dice. Anytime someone lands on your properties and pays out, invest a little bit into building your properties. (This is like life. When you get your paycheck, pay your bills, tithe a little, invest and save.)

After awhile, you can start bankrupting people when they land on your properties. If they have any properties you want, suggest that they can relieve some of the payment by giving you the properties instead. If they won’t, you can’t show any mercy. Make them pay the full amount through mortgaging and selling houses and hotels.

Side note: The no mercy rule should actually be enforced all of the time in Monopoly. The problem with this game is that it takes so long to play. This is caused by mercy and free parking. Mercy at bankruptcy just extends the game, making it painfully drag on. The house rule of putting money on Free Parking makes the game take longer because people get a boost right when you almost have them out of the game. I know a lot of people love this aspect, so don’t fight it to much, but know you know why the game is so long.

The end of the game can come slowly. Usually, a few of the players will be out, and it is just a matter of time and luck to get the last person out. (That person is often the original girl you traded with to get your first monopoly). You just have to wait it out. There isn’t much you can do to speed the end game. If you can land on the jail space. Stay there. Jail is the safest place at the end of the game.

We have thought about implementing alternate end game conditions in our house to shorten the game.

Anybody else figured out alternate ways of playing to make the game go faster, but still maintain the overall structure of the game?

In the old days there were really only a few games that everyone owned. The main ones are still best sellers today. (Monopoly, Risk, Stratego, Battleship, Scrabble). I played these games over and over with my siblings and my dad. Stratego was my favorite.

I remember playing over and over again and beating my dad, but never beating my older brother. As a dad now, I realize that my dad may have let me win. When I was about 11, I decided I wasn’t going to lose anymore and I came up with a strategy that has worked many times since. I have only lost twice since then, and I’ve learned from both losses that I’ll mention below.

This is called the Straight Across Trading Strategy (comment if you have a better name for it.)

Most people try going for the flag in Stratego, and most people expect you to be looking for their flag. In the end, you win if all their guys are dead which makes for a much more systematic win. I’ll describe each piece of the strategy below.

After developing the Straight Across Trading Strategy, the first time I lost, I was cocky and left my flag open on one side. I was implementing the strategy and was killing all of the other players guys systematically, and he went for broke. He slipped a guy down the side and went straight across the back, killing everyone. If I would have played properly, I would have had a bomb in the way of the flag, but I didn’t. He won that one.

Secondly on bomb placement. Some people try to be cute and put bombs on the front line, or just behind the lake. Sometimes you get lucky and they will attack with a high guy on your bomb, but if they are playing conservatively, it won’t ever work, and you won’t be able to move your guys where you want them.

It doesn’t really matter where you put the flag, as long as it is in the back row, and protected by bombs. If you don’t move it around in subsequent games, they may win on an all our rush, so just randomize.

Don’t reveal your strongest guys early on. You really want to test around with your scouts until you find someone good to kill. (anyone from 6 and lower can get you going on the trading strategy).

Kill the target with someone strong (consider using your 1 or 2, just don’t let them lure your 1 into a spy kill. That is the worst.)

Once you reveal your high guy, watch their eyes. They will always look at their 1 or spy to see how to kill you, then once you draw out their 1, don’t even worry about using your spy. Use your 1 and go straight for the kill (watching out for their spy).

With your 1 and his 1 dead. Start using your 2. Your 2 basically has  free reign to kill anyone that moves. Eventually, they will have to use their 2 to stop you, but then you bring out your 3s. Keep up the strategy, trading for their 3s if they show up. Eventually, you have a guy that cannot be killed. At this point, it is just about mopping things up.

I said I would explain my second loss.

I always joked with my family that I wouldn’t marry anyone that couldn’t beat me is Stratego. I met a girl and fell in love. She loved playing games, but just couldn’t beat me. We played about 8 games of Stratego and number 4 was pretty close. Game 5 I played to combat what my future wife had done in game 4, but she didn’t do it again.

I didn’t think to much about it, and we played a few more games. We got engaged, but she still hadn’t beat me. About a week before our wedding, we were playing again, and she used her game 4 strategy, but I wasn’t prepared for it. “It’s a trap!” She had been sandbagging games 5-8 so that I would forget about the strategy she used. She ended up taking the win. (We are happily married with 4 great children…and have never played Stratego again.)

Anyone else have a strategy that has worked well for you? Anyone else been defeated by your wife? Comment below.

(Footnote: the new version of Stratego has the strongest guy as a 10 instead of a 1. Flip the numbers in your head. Same strategy.)