A long time ago, in a galaxy far, far away…

To avoid any spoilers, I’m going to stop there. But in light of Rogue One, I am strategizing about one of the best Star Wars games ever. Epic Duels! The premise of the game is every Star Wars fan’s dream. You choose any character from a great selection of heroes and pit them in one on one battles against any other.

Have you ever wondered who would win if Boba Fett went head to head with the Emperor? Oh, and Fett has a thermal detonator. What’s not to like about that?

To optimize your game play, there are some bonus rules to add to the fun.

This game is great, but if you play with more than 4 players, the game can last forever. My favorite way to play is with 2 players. I have each of us randomly select three characters, and we go head to head with each one, best two out of three. This eliminates any advantages from getting one lucky character, and ensures that the games are short, and everyone gets plenty of turns.

The game can also move faster by giving everyone 6-7 cards at the beginning instead of 4. This just gets you into the action a little quicker.

After you’ve set up your ground rules, you are ready to play the game. Here is the strategy:

All of the characters are pretty balanced, except for Obi-Wan. The creators made him strong enough that you should always choose him if you get the chance. If you are playing with someone younger or inexperienced, let them play with Obi-Wan, and it is usually enough for them to be able to win.

Usually, it is in your best interest to draw cards before going into battle. Ensure that you either have an escape plan, or you can defend yourself for a turn or two before getting into range of the other players attacks.

The general categories of characters are the following (can you count as a category if you are the only one in it? #settheory):

Attackers should collect cards until they know they can kill their opponent in 1 or two turns. They have very minimal defense, so if you get stuck in the fight, you won’t make it out.

Defenders/Yoda is very hard to kill, but has a difficult time defeating anyone. He almost always has defense cards, so any chance you have to attack; you’ll have to take it.

Ranged characters can attack at any time. Target the opponent’s main character, shoot, and run. They usually can’t survive a close on fight, so keep your distance.

Special characters have many cards that work regardless of where you are in relation to the other characters. Stay away from the opponent and use your special cards to whittle down their life points. Save up one or two attack cards to finish them off when they get close. 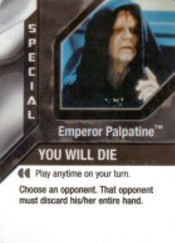 Balanced characters are great at attacking and defending. The strategy is the same as attackers, but it is easier to get defense and attack cards. You’ll be able to move quicker on your attacks, but still need an exit strategy.

Although there is some luck in your card draws, the fun game play makes this an excellent Star Wars themed game. Unfortunately, it is out of print. You can find it on Ebay for 100 dollars. Well worth the money. 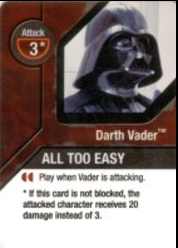 May the force be with you.